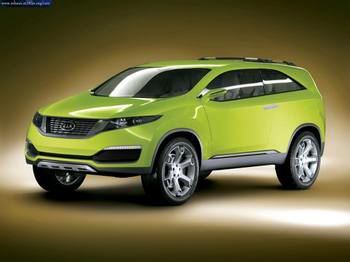 The entire new generation of Tiguan vehicles was formally listed in Shenzhen. It has boosted the SUV wave of strong car companies this year. Within this year, the SUV boom that has lasted for more than two years remains unabated, and many domestic automobile companies have announced their Listed on the new or modified SUV: In addition to the already listed Dongfeng Peugeot 3008, Changan Ford Maverick, FAW Pentium X80, hippocampus S7, imported new Grand Cherokee and a new generation of Tiguan, Mercedes-Benz next-generation GL, Imperial EX8, Beiqi B40, Chery Tiggo 5 and many other SUV models will also be listed in the second half of this year. According to relevant reporters, the number of SUVs that have been listed and are about to be listed this year has reached 33. Compared with the 19 models that were listed last year, the number of SUVs will increase by at least 60%.

The upsurge is not diminished It is understood that the new Tiguan has been listed on 8 models, the price range is 19,980 to 3,150,800 yuan, a total of 1.8TSI and 2.0TSI two engines. Since its launch in 2010, Tiguan has sold a total of 450,000 vehicles and ranked first in sales of the top ten SUVs in 2012, surpassing 2011 sales champion Honda CR-V. At the time of its peak, it had also increased its sales by 230,000 yuan in the market, and once there was a situation where supply was in short supply. The industry believes that along with the listing of the new Tiguan, the product line of the Tiguan series has been further enriched, which will enhance the Tiguan's competitive position in the SUV market.

In fact, the concentrated listing of Tiguan is only one aspect of the hot performance of the SUV market this year. In addition to the general public, the foreign-made brand Changan Ford's first domestically produced SUV Maverick was also listed in January this year. In the view of the industry, the emergence of Escaped Tiger has effectively broken the long-term strong view of Tiguan, the month of March and April. The sales volume has already approached 10,000 units, and it has reached about 18% of the sales volume of all models of Changan Ford. Although there is still a gap between the 15,000-month sales of Tiguan, it is enough to become a strong competitor for Tiguan in the future.

In addition, the 2014 imported Grand Cherokee was also listed on June 3, with a price range of 589,900 to 1,269,900 yuan, further challenging the market for Land Rover Discovery 4, BMW X5 and Volkswagen Touareg and other high-end SUVs. In the second half of this year, Mercedes-Benz new generation GL, BMW MINI PACEMAN and other high-end SUVs will also gradually enter the Chinese market.

In terms of self-owned brands, SUVs such as Pentium X80 and Haima S70 have already been on the market, and future emgrand EX8, Beiqi B40, Chery Tiggo 5 and other SUVs will also be listed in the second half of this year. Ma Yan, product manager of FAW Car Co., Ltd., also said in an interview with a reporter from the China Business News: â€œIn addition to the X80, Pentium's SUV series actual market segments include A-level entry-level, A-level mid-range, and A. Grade-grade, in the future there will be A0-class SUVs, B-class SUVs, C-class SUVs, etc..â€ Independent automakers such as Beijing Automotive, Geely, Chery, and Haima have also formulated more extensive SUV development plans.

Market temptation According to data from the China Automobile Association, China's SUV market has entered a period of rapid growth since 2007, and its sales growth has exceeded that of cars; in 2008, SUV sales growth was still higher than the industry average; 2009 The sales volume of SUV market increased by 47.15% year-on-year. In 2010, the sales volume of SUV was 1.326 million, accounting for 9.6% of the total passenger car market share. The year-on-year growth rate was as high as 101.27%, which was 4 times that of passenger cars; in 2011, it was increased in the Chinese automobile market. When the rapid decline to 2.45%, SUV models sales growth is still the largest of the various market segments; 2012 SUV sales reached a record high, a total of 1.837 million units, an increase of 22.7%, higher than the industry as a whole 4.3% The increase.

All historical data seems to prove that the SUV market is one of the most important areas in the Chinese auto market.

In addition, one noteworthy phenomenon is that in the 2012 SUV market, the overall performance of self-owned brand models has been better than that of foreign brands. According to statistics from Gasgoo.com, the sales volume of self-owned branded SUVs totaled 855,900 units in 2012, an increase of 40.2% year-on-year, and the market share was 43.1%, a significant increase of 5 percentage points; while the domestic sales of foreign-invested SUVs increased by 13.7% to 1,128,800 units. Market share dropped by 5 percentage points to 56.9%.

In this regard, Cui Dongshu, deputy secretary-general of the All-China Federation of Fellowships, said: "From the data point of view, the sales growth of self-owned brand SUVs is far higher than that of foreign brands, which shows that independent brands do have great potential for development in the SUV market. Because the self-owned brand responds more promptly to the domestic market, once the smell of hot business opportunities on the SUV market is detected, the corresponding models can be quickly launched. Unlike foreign brands, a longer period of application for the introduction of models to the foreign head office will be delayed. Market opportunities; Secondly, self-owned brands mainly fight for price differences, and the SUVs launched are basically below 150,000 yuan, which is exactly in line with the growing demand for low-end SUVs in the third and fourth-tier markets and the governmentâ€™s policy background to promote the development of small-displacement vehicles. ."

The market returns In fact, the development of SUV models has also been seen by many independent brands as a great opportunity to further capture the market share of foreign brands. General Manager Wu Gang of Haima Automobile Sales Co., Ltd. told the reporter when the SUV S7 model was listed on the Shanghai Sea Horse: â€œSince the SUV model is shorter than the sedan, it is still in a very long period of time. Therefore, this is the reason why the self-owned brand is closer to the market. The best area for the foreign brand gap is whether there is a lot of space for independent brands in terms of vehicle design or performance.â€

And Jing Jinghui, deputy general manager of the Beijing Asian Games Village Automotive Trading Market, also believes: â€œNow many self-owned brand SUVs are very stylish in appearance and their performance is good. They can cause great consumer interest in the market, so it can be said that the entire Under the background of the declining market share of independent brands, SUVs are the best areas for the development of independent brands."

At the same time, however, industry insiders reminded us that from the point of view of the growth of the SUV market, both foreign brands and self-owned brands should remain clear-headed in judging the future of this market and their investment in the market.

Relevant statistics show that from the third quarter of 2012, the sales growth of the domestic SUV market has begun to slow down significantly, especially since the sales volume increased by 50% in May and June last year, and it has been down since July. Later, the year-on-year growth rate for the single month has fallen back to 12.6%. From the perspective of this year's situation, as more and more car companies enter the SUV field, competition has intensified, and in the situation where supply exceeds demand, various car manufacturers and distributors have to increase the price reduction of SUVs.

"As far as Asian cities are concerned, last year, the discount rates of some mainstream domestic SUV models were basically only below 10,000 yuan, and this year's promotion rate has increased significantly; in addition, both domestic and imported models have appeared to be relatively large. The inventory pressure." Yan Jinghui said. According to Luo Lei, deputy secretary-general of the China Association of Automobile Association, said: "In the first five months of this year, the sales volume of the SUV market has shown a gradual decline in the chain ratio, and the pressure on the SUV market will increase." In this context, the industry generally believes that the previous SUV The rapid growth period is gradually dissipating. In the future, the domestic SUV market will tend to grow rationally. Each car company should also adjust the strategic layout of the SUV market accordingly, and can no longer be surrounded by blindly.

For the self-owned brand, Yan Jinghui particularly emphasized: â€œAt present, the self-owned brand SUV has achieved certain growth, but it does not mean there is no problem. For example, although the autonomous SUV has apparently improved in appearance, it has some details in the interior. Compared with foreign brands, it is still relatively rough, so in the future, independent brands should work harder on the quality of the SUV than on the quantity, and constantly improve the quality and workmanship of the entire vehicle, strengthen brand promotion, and gradually narrow the gap with foreign brands. The existing models should be able to firmly hold this position, otherwise, if the self-owned brands continue to expand their scale and achieve rapid vehicle launches, with the expected return of the SUV market growth rate and the expectation of a full-scale exploration of foreign brands. Speed, the result must be caused by many problems, not worth the candle."

As a leading trading company in Ningbo and backed by 30 years of export experience,  we are  specialized in Hardware production.

Our own experienced design team has been insisting on independent design and  development of products.All of our design inspiration from daily life,nature and our customer's request on the world.


The main products including hardware and handle, Which are well sold in Europe, Russia ,American,southeast Asia ,Middle East Africa and other countries.