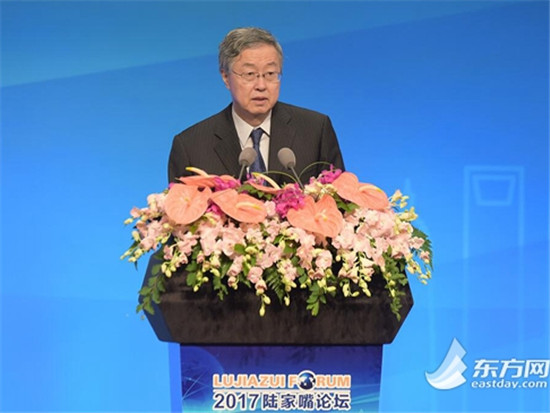 In fact, since the fourth quarter of last year, the determination of Chinese regulators to leverage has never wavered. Even though the central bankâ€™s net currency has exceeded 500 billion yuan since June, the main purpose is to ensure a liquidity balance at the end of the second quarter.
While de-leveraging, optimizing resource allocation is also a long-term driving force for sustained economic development. â€œProtection is easy to lead to laziness.â€ Zhou Xiaochuan pointed out on the 20th that the experience of openness in manufacturing and service industry can be derived. The financial industry is no exception. The same applies to the law of competition and openness, so that the financial industry will develop better. "I believe that with the strong support and joint efforts of all parties, China's opening up to the outside world will certainly be able to reach a new level. The trial and promotion of the Shanghai Free Trade Zone and the construction of the Shanghai International Financial Center will also achieve new achievements."
Zhou Xiaochuan also announced on the same day that the second phase of the CIPS cross-border payment system will be settled in Shanghai, which will better serve the internationalization of the RMB and the â€œBelt and Roadâ€ construction. Under the background of China's accelerated economic transformation and the in-depth promotion of the â€œBelt and Roadâ€, there will be more and more people who are optimistic about the stable performance of the RMB and the prospects for internationalization.

Increase competition and openness
Zhou Xiaochuan made a clear statement at the Lujiazui Forum. The financial industry should continue to increase competition and openness. "Individuals, starting from their own interests, advocate protection of the financial industry, and then grow and expand and then participate in international competition. National experience (including China's own experience) shows that protection can lead to problems such as laziness, financial soft constraints, rent-seeking, etc., but weaken competitiveness, damage the development of the industry, and the market and institutions are unhealthy and unstable. One example is that occurred before and after the Asian financial crisis. Those phenomena."
"China's construction of a socialist market economy means competing for competition and optimizing resource allocation to achieve economic and social progress and prosperity. In this process, opening up has played an important role." Zhou Xiaochuan also supports opening up and attracting foreign investment. The competition has been explained in detail.
First, the opening up of manufacturing has made China a world factory. Open to the manufacturing industry, Zhou Xiaochuan's observation is that most of the industries that participated in openness and competition earlier will eventually grow stronger and become more competitive. Openness is the process of resource allocation optimization, which is optimized by the market and competition mechanism.
After opening to the outside world, China's manufacturing industry has participated in international competition from processing trade to industrial manufactured goods. Afterwards, they went out to run enterprises. Chinaâ€™s manufacturing and enterprises were not washed away, but developed rapidly. China has become a manufacturing powerhouse and a world factory, and many areas are moving towards the mid to high end of the global industrial chain.
Secondly, the opening up has promoted domestic policy reforms. The open process has strongly impacted the traditional centralized planning economy's policy system and triggered a series of major domestic reforms.
"Recalling that, including price system reform, value-added tax reform, export tax rebates, exchange rate liberalization, and far-reaching reforms such as the GATT and the WTO (World Trade Organization) negotiations, were initiated by openness. Zhou Xiaochuan said that since then, China has introduced the concept of "national treatment". Whether it is domestic or foreign, the access conditions should be the same. Opening to the outside world has promoted trade and investment liberalization, facilitation, exchange rate marketization, and policy reforms such as the relaxation of foreign exchange controls. Lowering the threshold for market access, making markets and competition a universally applicable policy mechanism.
In addition, Zhou Xiaochuan also said that the opening of the service industry has a similar process. In the past, economics classified the service industry as a non-trade or non-tradeable industry. However, with the rapid advancement of information and transportation, with the progress of globalization, many services have become tradable. It also introduces competition through opening up, promotes operational efficiency and service quality improvement, and drives domestic related policy reforms.
It is worth noting that Zhou Xiaochuan also emphasized the necessity of opening up the financial services industry. â€œGlobally, most financial industries are competitive service industries. When China introduced foreign banks, it first wanted to introduce capital. Seen, domestic commercial banks have learned a lot from the competition, which has brought about a series of changes in product evolution, market construction, business model and management experience for China's financial industry."
Finally, Zhou Xiaochuan also mentioned that the â€œBelt and Roadâ€ is an open road involving a large number of emerging financial cooperation, which will bring further open demand, and also provide new opportunities for China's financial openness and international cooperation. The construction of â€œOne Belt, One Roadâ€ has also opened up overseas layouts for financial institutions and provided better financial services and development space for trade and investment capital operations.

De-leveraging
"The experience of the global financial crisis tells us that to prevent financial crises, we must first ensure the health of financial institutions. We must not be tolerant of high leverage, low capital, non-performing loans, etc. The more we do not open up and not compete, we will always condone. These low standards. Since then, the financial industry has become very clear as a property of the service industry in the market competition." Zhou Xiaochuan said during the Lujiazui Forum.
From Zhou Xiaochuan's speech, it can be found that although financial de-leveraging has achieved results, it has not yet reached the end.
According to the financial data of the central bank in May, as of the end of the month, the balance of M2 was 160.1 trillion yuan, a monthly increase of 502.9 billion yuan, a year-on-year growth rate of 9.6%, which was less than 10% for the first time in recent years. This reflects the de-leveraging effect of the past period of time.
According to the calculation of the Guotai Junan Bank team, all the sources of M2 derivation in the month were credit, and all other channels contributed negatively. This situation is similar to that in April. Self-operated bonds, non-banking/non-standards are the main reasons for lowering M2 YoY growth. These signals all show that financial deleveraging continues to advance.
Although the central bank has recently released liquidity in the open market, the tone of "stable" has not changed. The data shows that from June 5 to 9, the central bank's open market has 470 billion yuan of reverse repurchase maturity, while there are also 223.4 billion yuan of MLF (interim loan lending) due. In the same period, the central bank placed a total of 460 billion yuan in reverse repurchase in the open market. In addition, it also implemented 398 billion yuan of MLF operations on June 6, exceeding the amount due last week.
â€œThe reverse repurchase is less than 10 billion yuan less than the maturity, but the basic balance has hedged the negative impact on market liquidity. From a structural point of view, more 28-day funds also show that the monetary authorities are moving. There are more forward-looking considerations in the layout of sexual management to ensure the balance of liquidity at the end of the second quarter." Chen Hao, Bank of Communications Financial Research Center, told the First Financial Reporter.

Pave the way for RMB internationalization
If de-leveraging and optimizing resource allocation are doing "housework," then on this basis, the pace of internationalization will be more solid. Currency internationalization is an important step in China's integration into the world.
With the accelerating process of RMB internationalization and the gradual liberalization of capital projects, the existing RMB cross-border payment clearing model will not be sustainable. "In order to further promote the construction of Shanghai International Financial Center, the recent cross-border RMB cross-border payment system CIPS will be settled in Shanghai to better serve the internationalization of the RMB and the 'Belt and Road' construction." Zhou Xiaochuan said at the forum.
The main function of CIPS is to handle RMB cross-border payment services, mainly for cross-border US dollar transaction clearing. In October 2015, the first phase of the CIPS project was officially put into operation, and the second phase is expected to be completed by the end of 2017. After the CIPS system is put into use, it will replace the overseas clearing bank and become the main channel for RMB reflow and the pricing basis for RMB deposits. The upgrading of the RMB cross-border clearing model will promote the internationalization of the RMB into a new era.
In the future, the clearing bank will no longer be the main â€œoutletâ€ for offshore RMB and the pricing basis for offshore RMB deposits. These functions will be borne by CIPS. Previously, China's cross-border payment system was used by SWIFT (Global Banking Financial Telecommunications Association). In the context of continuous improvement of CIPS, China has its own independent payment system, which can be paralleled and will no longer rely entirely on SWIFT. By delivering messages, financial security and independence will be greatly improved.
There is a more vivid statement that the internationalization of the renminbi requires the renminbi to go out and return. For example, where the water flows, wherever the pipeline needs to be laid, CIPS is the pipeline of the renminbi. Wherever the pipeline is laid, where the RMB internationalization really goes.
The European Central Bank recently announced that in the first half of this year, the foreign exchange reserve equivalent to 500 million euros will be converted from US dollars to RMB, equivalent to 3.8 billion yuan, and the total reserves will remain unchanged. This is the first time the European Central Bank has included the renminbi in foreign exchange reserves.
Market analysis, it is expected that more and more central banks will join the layout in the future. According to SWIFT's latest statistics, as of the first quarter of 2017, the proportion of international payments in RMB was 1.78%, and the RMB was the sixth largest global payment currency.
"Although the market use of the renminbi has declined slightly in the near future, China's economy is huge and it has joined the SDR (Special Drawing Rights) basket. It is understandable that foreign central banks increase their holdings of renminbi, but only the renminbi in their foreign reserves. There is still a lot of room for improvement compared with indicators such as trade," said Ge Jiafei, a researcher at the Shanghai Development Research Foundation, to the First Financial Reporter.

Roma Roof Tile is made of ASA layer and PVC material. It is a beautiful design for residential house, villa, etc. The shape of Roma roof tile is different from PVC Roof Sheet. But these two products are all anticorrosive and acid-base resistant, and the fire rating reaches B1. The use of different projects, Roma roof tile is mainly used in urban flat to slope, agricultural markets, industrial plants, shopping malls, residential areas, new rural construction of high-end villas, awning, antique buildings.